by CamerounActu
in Actualités, Société
0 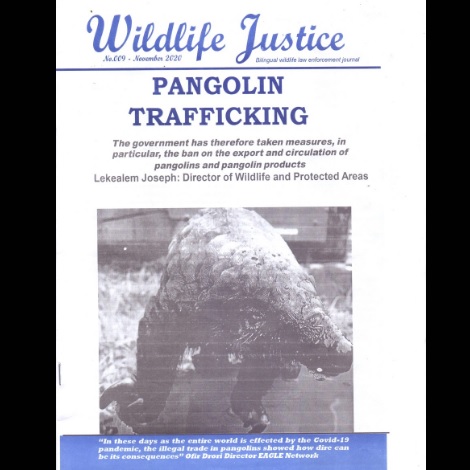 The 9th edition of “Wildlife Justice” has been published under the theme “Pangolin Trafficking”. The journal treats the trafficking of pangolins and their scales as the world faces threat posed by the Covid-19 pandemic whose origins have been linked to wildlife trafficking. Ten articles beef up the print and readers would be thrilled to go through the articles that focus on several topics including ecology, criminality, health, enforcement and the law.

Wildlife Justice is a bilingual and thematic publication of The Last Great Ape Organisation –LAGA which focuses on effective enforcement of the existing wildlife laws and possible solution to the enforcement problems.

Government’s policy in tackling the trafficking of pangolin scales is a focus in the journal that has been published for over a decade now and earlier editions treated diverse themes including great apes, wildlife law enforcement and corruption, extinction and ivory trafficking among others. In this edition the Director of Wildlife and Protected Areas at the Ministry of Forestry and Wildlife,Lekealem Joseph, outlines measures taken by the government to protect the species.Specifically he talks about the ban on the export and circulation of pangolins, to protect the species from extinction. Additionally, Lekealem highlights worked done by government and declaredthat“ the government and its partners have worked together to reinforce the law and have put in place a rehabilitation Centre at the Mefou National Park to rehabilitate these species”.

Pangolins are severely facing threats as a result of illegal hunting, poaching and deforestation of their natural habitats and are the most trafficked mammal in the world.In 2016, the Convention on International Trade in Endangered Species of Wild Fauna and Flora – CITES strengthened the protection of the pangolin by classifying all pangolin species in Appendix I. This gives the pangolins total protection by the law.

The journal is available for free to professionals, policy makers, conservation organisations, media houses, traditional authorities, higher institutions of learning including universities and to all who are interested to have a copy.