CHAN 2020: Cameroon boots out DR Congo to qualify for Semifinals

CHAN 2020: Cameroon boots out DR Congo to qualify for Semifinals 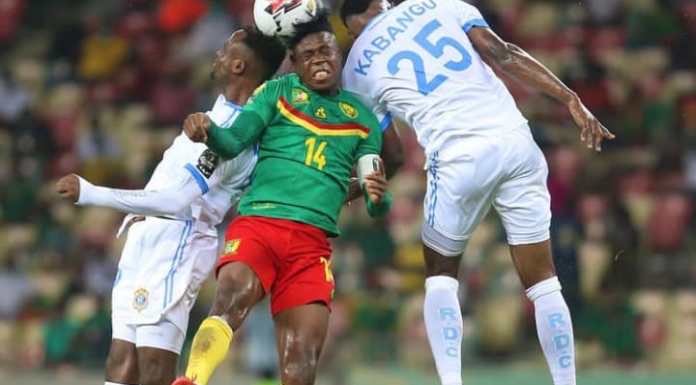 Cameroon is headed to the semifinals of the 2020 African Nations Championship game after kicking out two times champions, the Democratic Republic of Congo in a dramatic two one win.

In a game which many qualified as the finals ahead of the finals, two football nations pitted against each other had to prove their worth in front of a euphoric public.

The game fielded at the Japoma stadium, a first international play in the infrastructure for the intermediate lions saw the game’s opening score from the DR Congo’s Leopard, Makaby Glody at the twenty one minute of play.

This did not dampen the Lion’s zeal to please their home crowd as Ndjeng JosephYannick came in with an equalizer at the twenty ninth minute to keep hope up for team Cameroon.

Both teams seemed to tighten their defense after the equaliser in fear of incurring more goals.

At the forty one minute of play, Cameroon’s Felix Oukine Tcheoude found a way to break into the Leopads’ defense to give the Lions an upper hand with the scores on a two – one lead.

The second half of the game was even more intense, fans worried Cameroon was going to take in a goal as the Congolese pressed forward yet missing many chances.

Until the referee called it quits at the ninetieth minute of play that it settled on both fans and players that Cameroon is headed to the semifinals of the African Nations Championship with a 2-1 lead over two times champions, the Democratic Republic of Congo.

In a post match press conference, coach Florent Ibengue congratulated his counterpart, Coach Martin Ndtoungou Mpile for his victory to move to the next round of the competition.

He said his dream was to take home a third CHAN victory for his country but the odds were against him.

Coach Ibengue of the DRC spoke bitterly about wrong coronavirus tests delivered to them which kept him and a third of his team confined for almost half of the competition.

It was only when they refuted the results that a second independent test was conducted that saw only three squad members positive as opposed to the thirteen earlier declared.

He said he and other members were subjected to take medication for the coronavirus meanwhile they are and were not suffering from the virus.

Ibengue states that it was not a good image for the country especially as it impacted their preparation for the quarter finals game.

The coach of the Intermediate Lions on his part praised his players for the defense they put up and promised to put up a better performance in order to sail through to the finals of the competition.

Cameroon has encountered with the Democratic Republic of Congo nine times in the African Nations Championship Games and the DRC has never won a game against the lions in all these years.

For the nine times, Cameroon has recorded six victories and three draws.

Cameroon plays the semifinals this Wednesday 3rd January 2020 in Limbe.