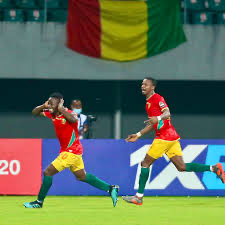 The Syli Nationals of Guinea, up for the semi-finals of the ongoing African Nations Championship games have expressed readiness to face their opponent Mali in what they have described to be a fierce encounter.

Guinea coach, Mohamed Kanfory Bangoura explained to the press this Tuesday February 02 that this Wednesday’s semifinals match will not only be a game of tact but also that of mind.

Coach Mohamed Kanfory Bangoura confirmed that the Syli National is mentally and physically ready to fight to reach the finals.

He added that both teams have the same play style and share long standing history of friendship as they are both neighbours of the west African region.

Mohamed agreed that they are not only playing for a win but for pride.

The team has received a message of encouragement from their government through envoy which the coach says is much needed to boost the moral of the players moving forward.

He was also very appreciative of the massive turnout of the Guinéen population resident in Cameroon who galvanized support for their win in the quarterfinals round in Limbe against Rwanda.

He said it makes him proud to be African looking at infrastructure in Cameroon that is envied at international level.

The Syli Nationals left the 2016 CHAN competition losing at the semifinals to Congo in a penalty shootout.

They say the team is not ready to be kicked out of the competition at a semifinals twice.

It is therefore a battle of for friendlies for pride and a qualification ticket this Wednesday 3 February at the Japoma Stadium in Douala Cameroon.