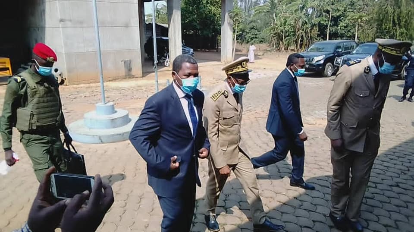 Cameroon’s Minister of Territorial Administration, Paul Atanga Nji has assured separatist fighters in the North West and South West regions of their outmost security once they lay down their arms.

The minister was in the North West region acting as the Head of State’s messenger of peace.

This action of reassurance comes as some separatist fighters remain sceptic about their situation the moment they drop their weapons and come out of hiding.

They worry they might be either gunned down or locked up and tortured.

Paul Atanga Nji outlined the different modalities to respect when the fighters decide to drop their weapons.

This is part of president Paul Biya’s meaningful actions to end the crisis in the two restive regions.

Minister Atanga Nji said only the states has an absolute legitimacy over violence, that is why other possibilities are offered to the fighters to drop their weapons unconditionally.

He assured the fighters that no law enforcement officer will bring harm to a surrendered separatist fighter.

The minister added that the military has the duty to protect the ex-fighter and brought to administrative authority.

The minister said once the arms are dropped, no further investigations will be carried on the former separatist fighter.

He said, out of scare some fighters will not want to present themselves to the police or administrative authorities directly.

He therefore proposed that the fighters can meet with their local religious and traditional leaders who will facilitate the passage from getting out of the bushes to the disarmament, demobilization and reintegration centres.