FIFAWC2022: Croatia Vs Argentina; The match between Coaches

FIFAWC2022: Croatia Vs Argentina; The match between Coaches

First semi-final match between Croatia and Argentina will be fielded in this Tuesday, December 13, 2022. Ahead of this, the players like their coaches have been reviewing winning strategies and staying mentally positive as they put up their best at the iconic 80.000 seater capacity Lusail stadium, 10 p.m local time Marksmen, Lionel Scolani of Argentina and his counterpart of Croatia, Zlatko Dalic faced a full hall of press men and women later this Tuesday to talk on their state of mind and how they intend to face-off each other in what the world describes a clash of the titans in Lusail.

First to take the stage was Lionel Scolani and his defender Nicolas Tagliafico of Argentina. They both described Croatia as a very good team that plays together, creates upsets and ensure a lot of maturity 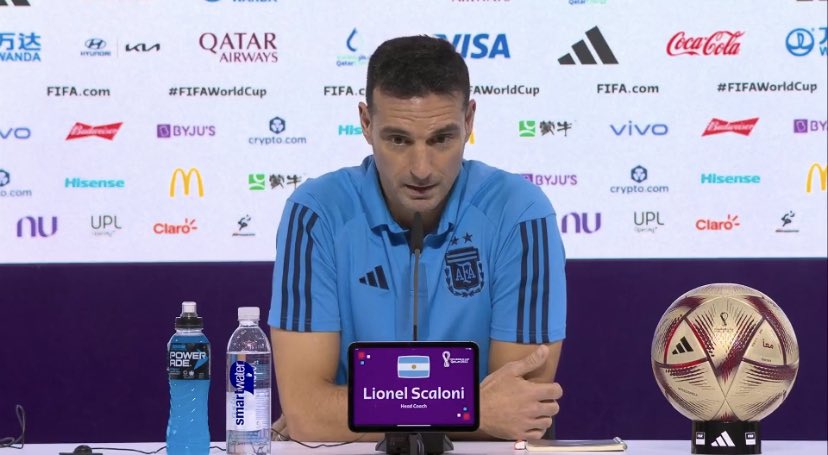 “We have analysed Croatia alot, they are a great team, with very great players, who play togerther. All I know is that it will be a great match tomorrow”, Lionel Scolani, Head Coach, Argentina.

Asked about Luka Modric one of the most capped and talented midfielders in the world, the Argentine football tactician said the Croatian is a talent on his own that even football managers can always take down notes when he is on the pitch.

“Luka Modric is a very good player with exceptional talent. It is a pleasure watching him play because of the respect he has for the game. Everyone wants to see him play and managers make take lessons too” By his side, Nicolas Tagliafico expressed the determination of his teammates to win. He said Lionel Messi has been a good captain, preaching with examples “We know what we are in for tomorrow, this is a semi-final game and our opponent, Croatia has great players, but we have to think of a way to hurt them. We are all focused on them already”

On his heels came Coach of Croatia, Zlatko Dalic who in his words said they are looking forward to facing Argentina this Tuesday but then thinks the semi-final match with England in 2018 in Russia was one of the most beautiful games in football history. The football tactician says Lionel Messi is a good player but still he has very young, agile and talented players in his side that are  hungry to mark a new page in the books of football

“Argentina is motivated than Croatia. We have studied them soo well, we have exhibited quality and strength which took us to the finals some four years ago in Russia and today in Qatar. Croatia is a small nation but amongst the four last nations presently at the World Cup In 2018 we played Argentina at group stage, it was not as crucial as the semi final match tomorrow. It is a great match for us all. We are compact and not ready to spare a chance. The world expects a solid game from Croatia and Argentina”, Head Coach of Croatia, Zlatko Dalic.

Croatian midfielder, Ivan Perisic who plays with English Premier League side, Tottenham Hotspur said they are determined to win with or without Lautaro Martinez, Angel Di Maria, Leandro Paredez , Lionel Messi amongst others

“I see a similar game like that against Brazil. We will do what we will be asked to do because it a decisive game.A couple of days Cr7 lost in his five outings at the World Cup. Messi will be there tomorrow and will want to make a difference”, Ivan Perisic

Croatia Vs Argentina; What you need to know!

The two semi finalists Croatia and Argentina qualified through penalties against Spain and Netherland respectively. But then, Croatia keeps a clean record as the only team with Morroco to have an unbeaten record till this stage of the tournament The two will have faced off each other in six different ocassions, three times at the World Cup and others at the level of international friendlies; Argentina counts 9 goals in five matches with goal hunter , Lionel Messi having four of them to his name. Croatia on the other hand, has been unbeaten so far, the boys of Zlatko Dalic won four times registering a 4-1 lashing over Canada and sealing a goalless deal with Morocco. History will be written, either Lionel Messi sails through and win his first World Cup trophy or Luka Modric wins for his nation. Morocco may be the first African world cup winner or betterstill France may retain the trophy as the first team in 60 years.