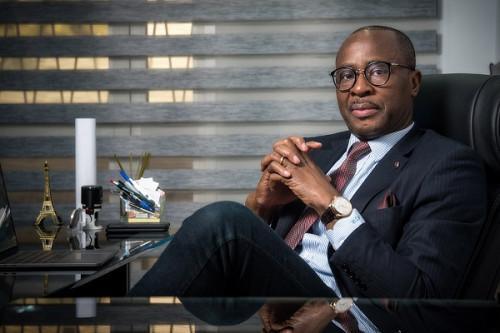 Business in Cameroon | Eighty (80) billion CFA Francs. That is the total amount for the “Douala Grand Mall & Business Park,” a gigantic business, trade, and leisure center, whose first phase (already 50 billion FCFA invested) was recently completed in the economic capital of Cameroon.

In this interview, Mathurin Kamdem, the dreamer and determined patriot behind this project, gives details about its development, challenges faced, his opinion of the local business climate, and the role of the diaspora in the development of Cameroon.

Business in Cameroon: On December 17, 2020, Cameroon’s Prime Minister Joseph Dion Nguté inaugurated, on behalf of the President of the Republic, the Douala Grand Mall, which is considered as the largest shopping and leisure center in Central Africa. As its promoter, could you tell us more about this infrastructure?

Mathurin Kamdem: The Douala Grand Mall is a large shopping mall built on nearly 38,000 m² of floor space, for 18,500 m² of retail space. It was co-developed with the British investment fund Actis. In its first phase, it will include a multiplex cinema with five screening rooms, operated by the Genesis Group, for a total of 1,000 seats, as well as 160 brands including a Carrefour supermarket, a spa, restaurants, a leisure center, shopping areas, and stores.

BC: In his inaugural speech, the Prime Minister said he wished for the second phase of the project to begin as soon as possible. What does this phase entail and when do you plan to complete it?

MK: The full name of the project is Douala Grand Mall and Business Park. After building the Douala Grand Mall, the first phase of the project, the second phase (the Business Park) will follow. In this phase, we will build a 4/5 star hotel, an office park, and housing units. Preliminary investment studies and even preparatory groundwork have already begun. We hope to effectively start the first stages of this phase this year. Let me emphasize however that the global economic situation has deteriorated considerably since our first feasibility studies, notably due to the Covid-19 pandemic, which has provoked a severe crisis in many sectors, including hospitality.

BC: How will the Douala Grand Mall impact the lives of the people of Douala, Cameroon’s economic capital?

MK: Our project has been designed as a “One Stop Shopping”, around the 160 international and local brands that will undoubtedly make the Douala Grand Mall the new got o destination for shopping and a major center of interest in the city. Designed to make consumers’ visits pleasant and encourage buying, this site will transform the entertainment and consumption habits of Douala’s residents.

The 300,000 visitors expected per month will be entitled to first-rate comfort and safety facilities (air conditioning, 100% energy backup, escalators, background music, free parking, various attractions, and games, etc.), and will have access to a commercial mix of shopping, entertainment, wellness, services, leisure, and catering services. We are trying to create a real agora -a minicity within a city- where you can go to the movies, eat, meet with friends and family, go to the bank, the pharmacist or optician, and at the same time, do some shopping. At the end of the second phase, you will even be able to work (in the office spaces) and live there (accommodation & hotel in preparation). So, with the Mall, you no longer need to go from one end of the city to watch a movie, to another for beauty treatments, stop at a store on the way to do some shopping, or run to a bank for your banking transactions. From now on, you’ll find it all in one place, in a pleasant setting. Finally, it will also be a business center and a platform to make our local products more visible. This will truly consolidate Douala’s position as a sub-regional economic hub.

BC: Based on your experience in the first phase of this gigantic project, what is your assessment of the business climate in Cameroon?

MK: The environment for doing business in Cameroon is comparable to that in similar economies but there is a slight advantage, due to a large number of sectors that can provide a “first-mover advantage”. However, we unfortunately still deplore a certain aggressiveness here and there, coming from many actors both private and public, as soon as a project is birthed.

In a context where strong international competition attracts foreign direct investment (FDI), we still need to improve our behavior in this area. I would like to specify here that any action aimed at making Cameroon more attractive as a land of opportunities counts and is part of the economic patriotism expected by all.

BC: Did you get any support from the government while developing the Douala Grand Mall?

MK: Overall, the project has benefited, through the Investment Promotion Agency (API), from the government’s policy of encouraging private investment. Several heads of ministerial departments, the Prime Minister himself, as well as the Presidency of the Republic, have regularly paid particular and very diligent attention to our requests whenever we encountered difficulties. Mrs. Marthe Angéline Mindja of the API, and Luc Magloire Atangana Mbarga, the Minister of Commerce, were proactively engaged during the establishment of our initial agreement with the government.

BC: Considering that funding is a major stumbling block for many projects in Africa, how did you manage to get the British investment fund Actis onboard the Douala Grand Mall project?

MK: My meeting with the British investment fund Actis took place through multiple working sessions with the International Finance Corporation of the World Bank Group. Very quickly, we decided to set up a small working team to carry out all the preliminary feasibility studies: financial, economic, architectural, technical, environmental, marketing-mix, traffic studies, etc., as well as due diligence and to establish the pre-partnerships necessary to make the final investment decision. Since this was the first investment of the British fund in this sector in French-speaking Africa, this phase had to be carried out meticulously and was spread over two years.

BC: What were the main challenges you and your teams faced while developing this project?

MK: Challenges were mainly logistical and health-related. The implementation of our customs and tax facilitation agreement, signed with API, was not easy, due to complex procedures that hardly match a project in the building industry, a project that has tight deadlines moreover. This is why we were affected by the extension of delays to move goods through the Port of Douala. We even faced additional demurrage costs, which could have been avoided.

Then, the health crisis also disrupted our habits and impacted our planning. We had to adapt to government and international requirements to fight the Covid-19 pandemic. The closing of borders and the battery of recommendations and safety measures forced us to amend our organization. I would like to congratulate all the project teams, who gave their best, on such a challenging situation caused by Covid-19. And we did not register any case.

BC: What made an engineer like you, who was Managing Director at the French giant Bouygues, give up such a great career to return to Cameroon, a country with a reputation of being somehow difficult?

MK: When I left Bouygues Construction, I was driven by the exhilarating dream of developing significant infrastructures in the main cities of my country, which would bring social, economic, and urban renewal. I was convinced that I would be able to deploy my skills and experience to develop large-scale projects by combining the many resources needed to bring them to fruition.

The precise idea of the Douala Grand Mall and Business Park germinated in my head as soon as I noticed that the development of shopping centers in Douala and Yaoundé was still at a low level, both in terms of number, size, and even quality. Existing projects were not bold enough for cities that are now the largest metropolises in Central Africa. I, therefore, decided to invest myself in this sector and to find, progressively, technical, strategic, and financial partners necessary to concretize such a project. I am happy to observe today that the completion of the first phase of this project has helped us, African entrepreneurs, overcome our complexes a little more, and made us believe more in our capabilities.

BC: Based on your experience, what advice can you give both to members of the diaspora and to public authorities, to ensure that fellow compatriots play a decisive role in the development of Cameroon?

MK: Cameroon is one of the countries that have a strong diaspora with enormous qualities in all disciplines and sectors. Estimates often mention four million people, which is enormous. This is a considerable and essential asset for the economic takeoff of Cameroon. I have never met, outside, a Cameroonian or someone of Cameroonian origin who does not love Cameroon. I want to tell them, with great sincerity, that Cameroon, in particular, and sub-Saharan Africa, in general, hold a mine of opportunities; and so many sectors of our economy still need to be consolidated, developed, modernized, or even created. “Local” difficulties, especially issues regarding their adaptation, are not prohibitive. In any case, they have no choice since they are part of the national development equation, alongside their brothers and sisters who have stayed here. As for public authorities, I think they should be more aware of this important asset, which is our active diaspora. They must initiate more campaigns to attract them, to rally them to our development effort. With some success, we can do this with soccer.

BC: After the Douala Grand Mall, what are the future projects of the Craft group in Cameroon and elsewhere?

MK: We are thinking about several projects. They take time to be realized. Also, we are going through a global economic situation that is not obvious.