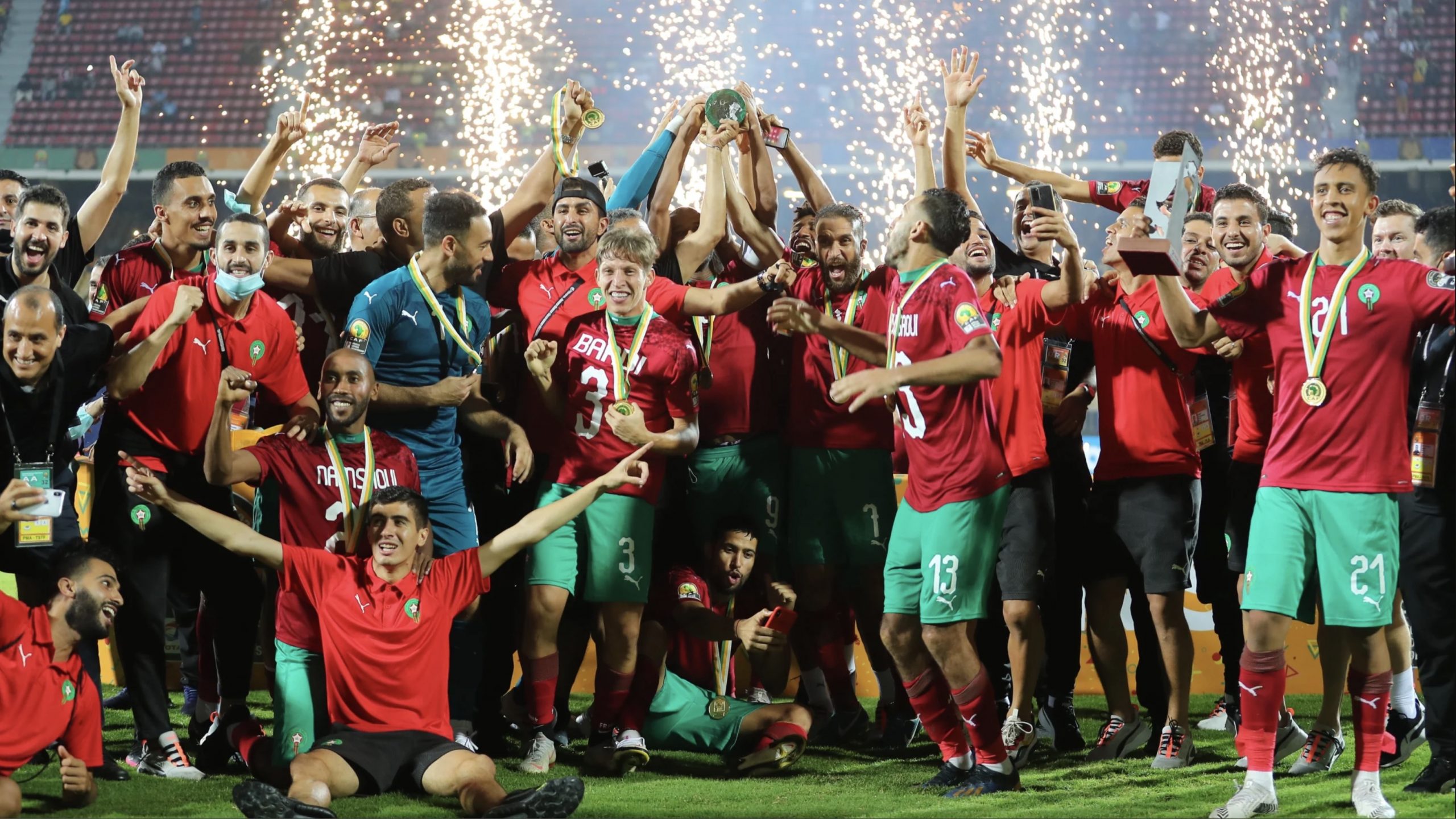 CAF | Morocco won the TOTAL African Nations Championship (CHAN) for the second time by overcoming Mali’s bold challenge 2-0 in a thrilling final at Ahmadou Ahidjo Stadium in Yaounde on Sunday night.
Two second-half headers by Abdelmouna Boutouil and captain Ayoub El Kaabi sealed the victory for the Atlas Lions in the tournament in Cameroon to hand them the title.

The Atlas Lions repeated the success on home soil three years ago by a margin that hardly looked possible as the Eagles stood toe-to-toe with the favourites for over an hour.

Houcine Ammouta’s side became the first country to win a second successive title in the tournament designed exclusively for home-based players.

Mali also felt their luck deserted them, but ultimately Morocco ran out victorious to revive the memories of the 4-0 victory over Nigeria in the CHAN 2018 final in Casablanca.

In one of the most exciting CHAN finals of the modern era, played out to a soundtrack of African drums, Mali and Morocco delivered an enthralling spectacle that brought delight to football enthusiasts in the continent over the quality on display.

Little separated the two sides in a well-contested first 15 minutes which lacked attacking display before El Kaabi ‘s header from a free-kick flashed across the face of the Mali goal.

Mali goalkeeper Djugui Diarra partly saved a tricky free-kick taken by Soufiane Rahimi from the edge of the box before defender Yacouba Doumbia cleared the danger.

The West Africans were not overawed by the situation and took advantage of the large space on the right side of the Atlas Lions defence vacated by the marauding Omar Namsaoui.

The Eagles should have opened the scoring when Mousaa Kone beat the Moroccan offside trap from the right side of the Morocco defence in the 23rd minute but goalkeeper Anas Zniti was quick off his mark to prevent the Stade Malien striker.

Mali grew in confidence and moments later talented playmaker Demba Diallo broke free after dispossessing Namsaoui before firing over the bar from 20 yards as they continued to pile the pressure on the North Africans.

Goalkeeper Diarra was called into action to confidently save a beautiful cross from Hafidi before a Diallo header in the 36th minute from a cross from the right went just wide.

The Moroccans regained their control of the game but the central defensive pair of Doumbia and Barou Sanogo dealt effectively with their long aerial balls before the break.

The Atlas Lions returned from the break and restarted the match in a similar fashion as they did at the start of the game by piling the pressure on the Malians.

Their calls for a penalty kick following a tackle on Rahimi in the box were subjected to a VAR review before the appeal was rejected.

In the 56th Issaka Samake sweetly taken free-kick met the head of Sadio Kanoute and the ball hit the upright to save the blushes of the North Africans.

A long ball from midfield in the 63rd minute eluded both Morocco central defenders of Soufiane Bouftini and Abdelmouna Boutouil allowing striker Diallo to steal in and fire but goalkeeper Zniti produced another excellent save with his legs.

Boutouil made amends six minutes later when he jumped highest to deliver a powerful header from Namsaoui’s corner kick from the right that beat goalkeeper Diarra to break the deadlock.

The Moroccans extended their lead ten minutes later under similar circumstances when captain Ayoud El Kaabi dived to head in Mohammed Ali Bemammer’s header from a corner kick from the right to spark wild celebrations from the bench of the Atlas Lions.

There was enough time for hardworking defender Isssaka Samake to be sent off for his second yellow card of the match, sealing the fate of the Malians and sparking wild jubilations by the North Africans.

“First of all I will congratulate Mali and coach Diane Nouhoum for their run in the competition. Reaching the final is a feat. For us we came here with a changed team by 65% and a new staff. So it was about writing our own story and winning for ourselves. Today’s final was difficult but we did the essential, won and I believe we merit the victory plus the trophy”

“We came to win our first trophy but faced a very good Morocco side, I believe they were the best team in the tournament. Today’s game was decided on little details, I want to congratulate coach Hussein. We return home and continue to work for the best in future,”