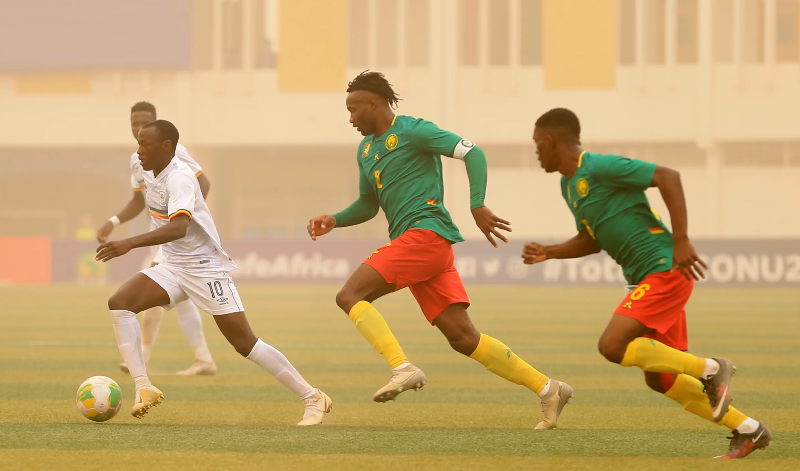 [CAF] | Sunday Jang Junior scored a delightful header as Cameroon beat Uganda 1-0 at the Olympic Stadium in Nouakchott on Wednesday to see the young Indomitable Lions become the first side to book a slot in the quarter finals of the Total U-20 Africa Cup of Nations (AFCON), Mauritania 2021.

The young lions negotiated their passage to the last eight against Uganda’s Hippos who had some of the best chances but failed to make them count.

Jang Junior was Cameroon’s hero once again glancing in a deflected corner past the helpless Ugandan keeper on the half hour mark to register his second goal of the tournament.

In a tightly contested game at the Olympic Stadium in Nouakchott the Ugandans started the better side with some swift counter attacking football.

Towering forward Richard Basangwa headed over the Cameroon goal in the third minute when he was picked out by Najib Yiga’s inch perfect delivery.

The Lions of Cameroon responded with a counter of their own moments later but failed to trouble the Ugandan defence who cleared their lines.

It was Uganda’s Hippos turn to create some danger when playmaker Isma Mugulusi played Basangwa through on goal, but the forward missed the target with his effort going over the goal after minutes.

Kenneth Semakula then rose highest to an inswing corner before the half hour mark when he was unmarked at the back post, but couldn’t get the effort behind the net.

With the missed chances, Uganda were made to pay when Jang Junior glanced in a corner from the right against the run of play to stun the Hippos who didn’t defend the setpiece well.

After conceding Uganda regrouped again playing through the wide areas and came close to levelling the score twice but Cameroon defended well.

Basangwa tried his luck from distance ten minutes after the break but his effort went wide off the Lions goal. They continued to pile pressure on the Cameroon defence, who stood tall all the time.

Substitute Ivan Asaba brushed the outside of the Cameroon goal with a stupendous strike, after skipping away from a couple of challenges before firing against the woodwork.

The closing minutes was an open affair with the two sides playing direct but it was Cameroon who walked off the pitch with the victory which books their place in the quarter finals of the biennial tournament.

It is a huge pleasure to be named man of the match and it is an honor to have scored the goal that took the country to the quarter finals. I am glad and pleased to be defending the colors of the national team.

We had a good fighting spirit because we wanted to make it into the quarter finals and that is what helped us get the win today.

We are satisfied to have won today because it wasn’t easy. It was a very tough match because Uganda were also a good team and not very far from what we faced against Mauritania. I think we were lucky to win today but I must say I am happy.

We are now through to the quarter finals but the journey is not over yet. We will continue to fight to the last match.

We might have lost today but I am satisfied with my team. I think we played very well against a tough and physical team. I played against Cameroon in the 1999 All Africa Games and I know what kind of a team they are and we tried to prepare well with that in mind.

In the second half we tried to bring in some light flexible players to try and put them under pressure which we did, but unfortunately the chances we had we could not utilise. That’s the difference in football. I salute Cameroon for winning.