The plight of child hawkers in Bamenda

The plight of child hawkers in Bamenda 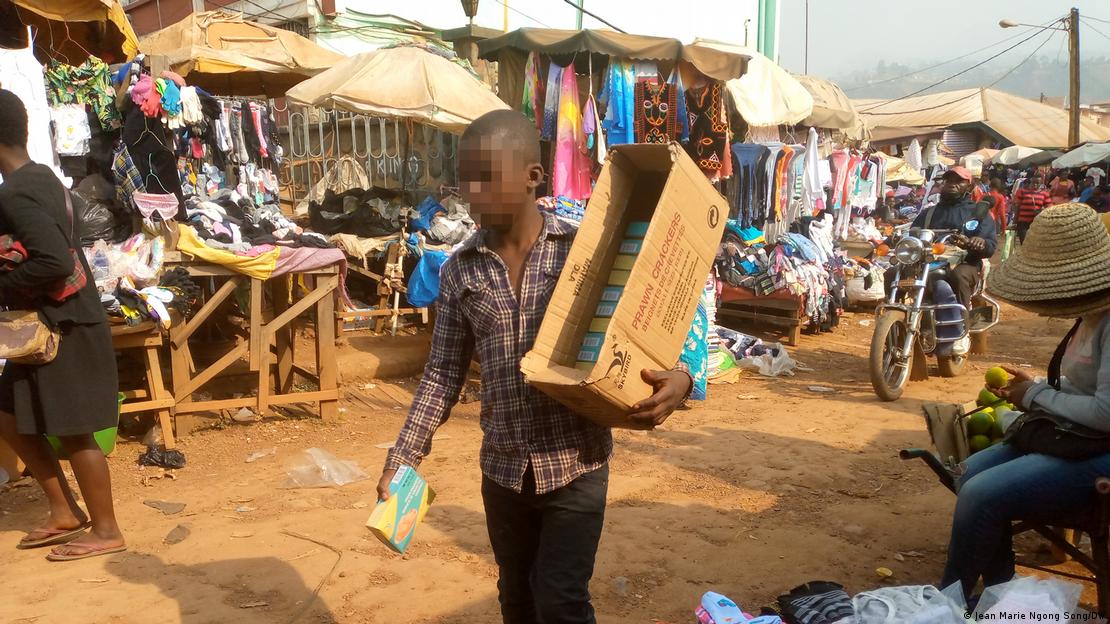 Child-protection officials in Cameroon say poverty is driving many children to start begging and hawking on the streets. As a result, the English-speaking region of Bamenda is grappling with a spike in child hawkers.

In Cameroon’s Northwest city of Bamenda, hawkers sell items in traffic and along busy streets.

One of the hawkers is a 12-year-old girl, Favor Mbah, who has spent several hours on the street under the scorching sun, trying to attract customers for her products, including biscuits and other food spices.

“I sell because I want my father to use the money to buy my books and send me to school and provide in the house,” Mbah told DW.

Her parents are aware that she is hawking on the streets and consider it a form of support from her, she said.

Blessing Sang is another young female hawker running up and down the streets. She told DW that she needed to raise enough money for a happy festive season.

“I sell cakes. I sell at the main market [and] food market. I am selling cakes because I want my mother to buy my Christmas and New Year dresses,” Sang said.

Mbah and Sang are risking their lives crossing the streets. They told DW about how oblivious they were to the dangers posed by the hawking activity.

But not all the kids who hawk on streets in the central business district of Bamenda have the backing of their parents.

A few meters away, near Bamenda’s food market, Emmanuel Toh wasn’t willing to go onto the streets to sell on a recent day. His mother is concerned about him getting knocked down by a vehicle.

“I’m selling biscuits. Sometimes I sell tomatoes. I sell only at the food market because my mother has refused [me hawking on the street]. [She doesn’t] want me to cross the road but sometimes I hold hand with my friends and cross,” he told DW.

Recently, children believed to be younger than 12 have taken to hawking, which is usually done by adults.

The kids are, however, giving the normal operators a run for their money, as hawking requires active persuasion, which the kids appear to be fully aware of.

Child-protection officials blame the increase in the number of children hawkers in Bamenda and other cities across Cameroon on the closure of schools in December, ahead of the festive season.

Poverty driving many kids to the streets

Cameroon is one of the poorest countries in Africa.

About 3.9 million Cameroonians are in dire need of humanitarian support, according to UNICEF’s 2022 situational reporton Cameroon.

Out of that figure, about 2.1 million children need humanitarian support, largely because of poverty worsened by floods and insecurity.

In addition, over the past six years the English-speaking regions of Cameroon have become a conflict zone. Separatist fighters and Cameroon’s military are engaged in bloody civil strife that shows no sign of ending soon.

At least 6,000 people have been killed, according to Human Rights Watch. Almost 600,000 have become internally displaced, and the humanitarian crisis continues to intensify.

In 2021 alone, more than 700,000 children were deprived of education in the Northwest and Southwest regions.

Child-protection officials in Cameroon are now concerned about the impact on children who roam the streets.

Josephine Nsoso, a children-protection officer in Bamenda, said such children continued to be exposed to huge risks.

“Parents who send children out there risk exposing those children to different risk or harm. A lot of children can be hit by a vehicle,” she said.

According to Nsoso, girls engaged in hawking also risk being sexually assaulted or abducted as a result of insecurity.

“A lot of children have been raped hawking in the streets. Children are kidnapped and ransoms demanded. Other children are exposed to harm that comes from peer pressure,” she explained.

Street hawking isn’t restricted in Cameroon, but child-protection workers such as Nsoso want parents to ensure that their children are off the streets.