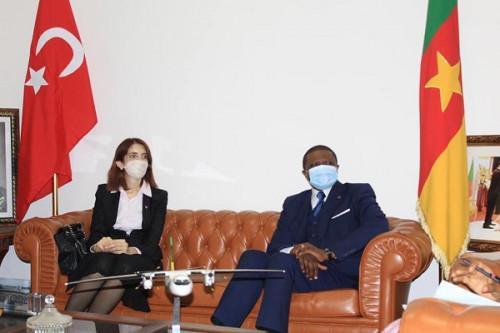 Business in Cameroon | Eight years after the project was first discussed, Turkey recently relaunched discussions with Cameroon for Turkish Airlines project to make Maroua (the regional capital of Far-North Cameroon) its sub-regional hub.

The project was launched during a meeting on February 17th in Yaounde, by Minister of Transport Jean Ernest Masséna Ngalle Bibehe to the outgoing Ambassador of the Republic of Turkey in Cameroon, Ayse Sarac.

“In addition to serving Yaounde and Douala, Turkish Airlines plans to make Maroua its sub-regional hub. By the way, a request was formulated by the said company in that regard, when several Turkish businessmen were making investment pledges during their prospecting mission in Maroua in 2013,” the Ministry of Transport informed.

During the meeting, the Cameroonian Minister of Transport reassured the ambassador of his Ministry’s availability to collaborate with the incoming ambassador to further develop several technical cooperation programs between the two countries in the transport sector.

Although the official provided no details about the program, his statement signifies the Turkish Airlines’ project is still under consideration.

The Turkish party’s choice of Maroua as a sub-regional hub was not the result of a random selection. Far from that. Maroua is a strategic crossroad for airlines serving (via Cameroon) Sahelian countries such as Chad, Mali, Sudan, Libya, and Niger.

Turkish Airlines’ project is being discussed again in a context marked by the coronavirus pandemic, which forced several airlines to reduce their movement while waiting for the end of the pandemic.