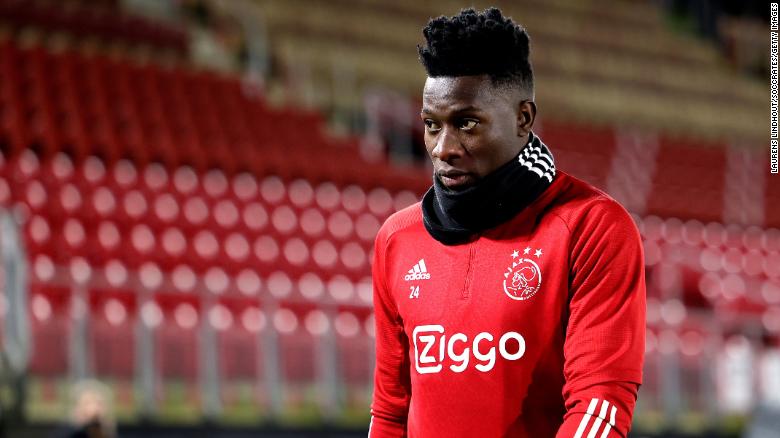 GOAL | Ajax have been rocked by the news that their first-choice goalkeeper has been banned for 12 months by UEFA after failing a doping test
Ajax CEO Edwin van der Sar has backed goalkeeper Andre Onana after his 12-month ban from football, saying he believes his doping violation was a genuine mistake.

Starting February 5, the Cameroon international goalkeeper cannot play or train after a banned substance was found in a urine test.

Van der Sar says that, while he cannot be 100 per cent sure, he trusts the 24-year-old’s explanation of what happened.

Why has Onana been banned?

Onana was banned by UEFA after an out-of-competition drugs test in October found the banned substance Furosemide in his urine sample.

He says he accidentally took a pill which had been prescribed to his wife, as he had been feeling unwell and believed it to be aspirin.

Can Onana appeal his ban?

Ajax have already confirmed they will appeal the ban at the Court of Arbitration for Sport (CAS).

A club statement said: “The disciplinary body of the football association has stated that Onana had no intention of cheating. However, the European Football Association believes, on the basis of the applicable anti-doping rules, that an athlete has a duty at all times to ensure that no banned substances enter the body.”

What has Van der Sar said?

Van der Sar explained how Onana came to take the substance and says he believes it was simply “stupid bad luck”.

“I am 100% convinced that the positive doping test was the result of a misunderstanding,” Van der Sar told De Telegraaf.

“During the international break in November we received a message from UEFA that Andre had been detected with a banned substance in his urine during an ‘out of competition’ check at De Toekomst (Ajax’s training base).

“That was a huge shock for us and the same was obviously true for him when we sought contact with him in Cameroon.

“A few days after the UEFA message, he came directly to De Toekomst from Schiphol [Airport] and we went to his bathroom with the doctor, where we took all the medication and anything that looked like it for examination.

“Andre was not feeling well on the day of the check-up and thought he had taken a headache tablet, but it turned out that he had taken a pill from a strip of his wife’s medicine, which she had been prescribed after the pregnancy of their first child. It looked quite similar in name and the packaging. And the strips were loose in his locker. It’s stupid bad luck.”

What effects does Furosemide have?

Furosemide does not have any performance-enhancing qualities. It is a diuretic medication used to treat fluid build-up due to heart failure, liver scarring, or kidney disease, and can also be used to treat high blood pressure.

Van der Sar believes this adds credence to Onana’s claim that he took it by accident.

“It doesn’t make you stronger or faster. Andre, who has been checked many times, is the undisputed number one with us and Cameroon and is highly regarded by all top clubs. You don’t get that from one pill.”

Van der Sar also addressed the claim that Furosemide can be used as a masking agent to prevent other substances showing in doping tests.

“That could be the case, yes. But in all the other checks, Furosemide was not found and no other substances either.”